Midwinter of the Spirit reviewed

'During my training I had more than one person ask me if I would get to 'go ghost hunting' as a priest'. More TV Vicar? author, Rev Bryony Taylor, reviews the new ITV drama, Midwinter of the Spirit ... 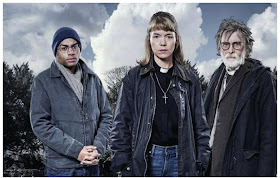 This autumn saw ITV release a new drama with a clerical lead, Midwinter of the Spirit, based on the popular books by Phil Rickman. Of course, I had to tune in, given that the main character, Merrily Watkins (bit of a daft name) is a woman priest recently trained in the art of Deliverance Ministry (or what-we-used-to-call exorcism).

During my training I had more than one person ask me if I would get to 'go ghost hunting' as a priest. Because of films like the Exorcist the whole area of priests and demons is a source of much fascination - the two often go together, although in the popular imagination, the exorcist priest is always a man and always Roman Catholic. So Phil Rickman, in creating a woman priest exorcist character is tapping directly into this fascination by adding a further layer of interest: what, a woman exorcist? Does the Church of England get involved in that?

Well yes it does at it happens and this TV mini series pulled out all the stops in this dark horror, complete with creepy music and the evil lady's maid from Downton Abbey playing a sinister occult leader.

Friends of mine that have read the books have said that the character of Merrily was not how they'd imagined her. I haven't read the books so can't comment on that. I thought she was quite well-drawn, shown to be a vulnerable woman, a single mother having moved to a new place to help her get over her abusive (?) husband's death in a car crash. Merrily's bishop, played by Nicholas Pinnock, is young, black and handsome. So far, so good.

There are a few flaws in the production, however. The horror set ups are a little hammy, the music warning you about each jump (although it is quite genuinely scary, the scene in the hospital will make me nervous about night visits for a while!) The most irritating flaws, however, are down to the costume department. The bishop wears a black cassock over his purple shirt that clearly looks like it's come from the bottom of a dressing up box. It doesn't fit him and looks all wrong. It kind of clashes with his character who is sharply dressed and dynamic. Merrily is seen at one point coming out of a baptism service wearing a chasuble with a stole over the top - totally wrong. She also, although this is more a matter of taste than anything, wears a really hideous denim clerical shirt! Why is this an issue? Well you could argue that people watching Casualty or The Bill would point out similar errors (my husband is always pointing out the cheap stethoscopes doctors use on Casualty that you'd never be seen dead using). Make a programme about a particular profession and people are always going to point out mistakes. However, for me, it is important to get these things right - and not that difficult. Many people will have watched Midwinter of the Spirit and found out for the first time that Church of England vicars do get involved with deliverance ministry. The programme will have had a lot of curious viewers. So to get some of the basics wrong just lent the whole thing an air of inauthenticity, and perhaps, incompetence. This was frustrating as it somewhat diluted the thrill of having a black bishop and a single mum priest on prime time television.

For the sake of the drama/plot quite a few rules are broken. I can't imagine someone being made Diocesan Exorcist by a bishop when they've barely completed the training. But then, rules and regulations (especially those of the Byzantine Church of England) certainly do not make for compelling television!

That said, I predicted when interviewed about my book earlier this year that we would see more vicar characters on TV precisely because ministry in the Church is an area alien to a lot of people, and therefore arouses curiosity. Coupling this with a bit of horror tapped right into people's fascination with the darker edges of ministry today.

On the whole I enjoyed this new thriller, I liked the fact that the lead character was a woman priest and was well-rounded and realistically portrayed, experiencing the same challenges as any other single parent might. I enjoyed the exploration of the occult and the hokey historical storyline of saints and demons. Roll on series 2!

This is an excerpt from More TV Vicar? Christians on the Telly: The Good, the Bad and the Quirky by Bryony Taylor, available now in paperback and eBook priced £9.99.
DLT Books at 04:06
Share